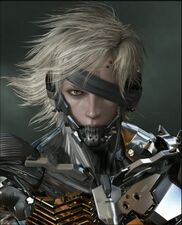 RaidenSnake was a regular serious caller on True Capitalist Radio. He is from the UK and has a distinct accent, usually calling from a Skype number before the death of Skype in June 2016. Ghost often calls on him while discussing affairs relating to the UK. Like many other serious callers, RaidenSnake is seen as a "Fakebrit" and a liar, due to him wasting time on Radio Graffiti, and being too simple on topics whenever he talks to Ghost. He is a former member of both the Inner Circle and Discord chatrooms.

In Capitalist Episode 418, before Twitter Shoutouts, Raiden called in reading a crude Christmas poem to Ghost, claiming it to be "British humour". However, it caused Ghost to cans.wav out of disgust, leading to trolls congratulating him during Shoutouts.

On Capitalist Episode 347, RaidenSnake suggested to Ghost that he ban some (not all) trolls from Radio Graffiti because of legit callers not being able to get through, and also clarified this by suggesting everyone should be able to call in and later created a poll on his Twitter about it. He got some amount of negative criticism from the fans due to a misunderstanding. They said that Radio Graffiti is mostly for trolling, and claimed no one else should be able to call so that it stays off the main show. After this incident, their account was deleted for a short period of time, and was confirmed to be an automated filter error caused by Twitter, and has since been reinstated. It has been confirmed his Twitter was deleted yet again, and the current speculation as to the reason why may be due to accusations made against them due to being a potential target of the TCR Civil War Incident.

During the G Suicide Hoax Incident, several trolls claimed that they had dirt on RaidenSnake, "proving" that he is an anime fan, but ultimately decided to withhold this information because they feared that they would only raise the already high tensions caused by the incident even higher.

On Capitalist Episode 408, the 727 Caller claimed that RaidenSnake is both an anime fan and a furry, causing Ghost to have a breakdown and Rage Quit. Later on, a message was posted on Twitter attempting to debunk such claims, with him replying, "It's disgusting what these trolls do to people! What they've been saying is just made up just to get rid of me as they can't stand serious callers! They don't realize how much damage they can do!" However, this was to no avail, as proof had already been shown by the 727 Caller. Some time later, RaidenSnake's Twitter account was deleted for what may be the final time.

On Capitalist Episode 409, these jokes continued, with someone going so far as to create a fake Steam profile in Raiden's name with some disgusting images on it. Ghost threatened to take a break after this show, but he returned the following Monday as usual.

In the end, Ghost refused to believe the accusations against RaidenSnake, passing them off as a conspiracy against him. This irritated the trolls and went as far as deeming Ghost a hypocrite for denying such conspiracies, yet supporting the Pizzagate conspiracies, a relevant topic at the time. In addition, RaidenSnake remained a relevant serious caller.

On the 7th Episode of the Saturday Night Troll Show, RaidenSnake got into an argument with a caller, who told him that he lacked content. Raiden argued with the caller, ultimately culminating in Raiden disconnecting his call and temporarily deactivating his Twitter account, but he later recanted saying that he has been hacked, an excuse he has used on innumerable occasions, but has never actually proven. The caller later encountered TrumpinCapitalist and KaraszKun, who attempted to support RaidenSnake, but wouldn't be enough to subdue the caller.

On the 8th Episode of the SNTS, the caller apologized to both RaidenSnake and KaraszKun for what happened the previous broadcast.

After the events at the end of Capitalist Episode 498, Raiden left the Inner Circle chatroom, according to rumors, he has not returned since.

RaidenSnake came back when Ghost initially returned on Halloween 2017, however due to the new time slot for the show, which is very late in the UK, RaidenSnake has said he is unable to call in or listen live anymore. Ghost gave him a shout-out on Episode 567.

He joined Ghost's Discord chat on May 13, 2018, and left just 3 days later. The reason for this is unknown.

On Capitalist Episode 572, Ghost let someone in his TCR Chatroom speak up claiming that it was RaidenSnake. However, listeners claimed it was just Ghost pretending to be Raiden using a voice changer.

Retrieved from "https://truecapitalist.miraheze.org/w/index.php?title=RaidenSnake&oldid=18621"
Categories:
Cookies help us deliver our services. By using our services, you agree to our use of cookies.