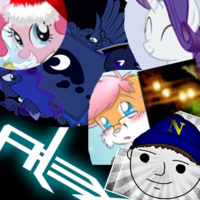 The Faces of Evil.

A remix is a special mixing of audio that usually takes something Ghost says or sings, and slaps it over an already existing song.

To Ghost's credit (for having an amusingly wide vocal range), a massive number of popular songs have been remixed under his impressions of them by manipulating his cover of the song through audio software, then playing the results back to him during Radio Graffiti. Ghost's reactions to these clips vary considerably - from mild displeasure to Rage Quit inducing, depending on the content and quality.

As a result, remixes are one of the most popular Trolling Tactics on the show, and arguably demonstrate an artistic side of the True Capitalist Radio community through the numerous and creative clips they have come up with to besmirch Ghost.

Making remixes as a trolling technique started after DarkRazorZ's videos brought many new listeners to the broadcast. A number of trolls began making songs out of one of Ghost's Melting Pot of Friendship rants from a June 2011 broadcast (which had a very exploitable rhythmic quality). By August 2011, songs from Video Games were occasionally being played during Radio Graffiti, and caught the attention of Ghost, who did not find these 'circus songs' in good humor, and began to rage whenever he heard them. Naturally, more and more were produced after this fact.

The 'Melting Pot of Alcohol' remix by DJ Alex S. (first played on the show on August 22nd, 2011) is generally considered the king of all remixes, and inspired the creation of even more audio of Ghost singing afterwards, which he took with great offense, threatening slander charges against the music-makers who posted their audio exploits to YouTube to no avail.

Remixes are now a common occurrence on True Capitalist Radio, with hundreds having been made (although many were lost in the 4 year lull) and played on the show. A number of talented remixers get special prominence for their clips, often being saved for the last call of the day so that Ghost can purposefully rage himself out of a broadcast. The most notable of these individuals include NavyHuskie, CelticBrony, CosmoBrockington, and Coodoo17.

Generally, the creation of a remix loosely follows this pattern of events.

Several popular remixes have been made taking Ghost's voice and putting it over already existing songs. Some of the most famous of these are the "Inspector Hambone", "She Blinded Me with Science", among others.

Remixing Ghost with famous songs he knows, especially ones from bands or artists he dislikes (examples: the Dave Matthews Band, Eminem and Nickelback) is one of the best ways to troll Ghost.

Music from Video Games is commonly used; a remix of a song from Dr. Mario got Ghost very angry throughout August 2011, and there have been mixes of Zelda, Team Fortress 2, and even Contra.

While most remixes are done using already existing songs, some splicers and remixers have composed their own original songs for Ghost. The most famous is DJ Alex S.'s Ghostie-award winning song. "Melting Pot of Alcohol". There is also a form of remix that is technically not a remix at all: a song sung by the caller, either live on the air or prerecorded, insulting Ghost in some way. Ghost has termed these "insult carols". Before becoming famous for his remixes, Coodoo17 often utilized these "insult carols" as a trolling technique.

Remixes are generally simple to create because it's just a matter of combining Ghost singing and the real song. A good sound editing program is Audacity. Audacity does all the basic audio editing functions a splicer or remixer should need and is available as freeware. Take tutorials from YouTube if you are new to sound editing in general. Listen to older broadcasts (before June 2011) and find portions where Ghost sings a song - those broadcasts are not listened to anymore, so there is lots of unused content that can be utilized (it will also anger Ghost since he will have forgotten by now to have ever said/sung those things).

A high quality remix such as Melting Pot of Alcohol can require more extensive knowledge in music-making online. Adding Ghost's voice into an original song takes the least work of all - as it is just more splicing and pitch shifting normally. Listen to other remixes to get the idea of what should be placed in one and how it should flow.

There are three types of Speed Remixes:

Ghost refers to essentially all Speed Remixes as "Internet Buttstalker-esque", as he feels that the close following of the show necessary to make them requires a stalker-like obsession with him.

Retrieved from "https://truecapitalist.miraheze.org/w/index.php?title=Remix&oldid=13603"
Categories:
Cookies help us deliver our services. By using our services, you agree to our use of cookies.