Richard Bertrand Spencer (born May 11, 1978) is an American white supremacist and the president of the National Policy Institute, a white nationalist think tank, and Washington Summit Publishers as well as a self described "Karl Marx of the Alt-Right" as he is considered the person who coined the term alternative right. Spencer has described himself as an identitarian rather than a white supremacist and advocates for a white homeland for a "dispossessed white race" and calls for "peaceful ethnic cleansing" to halt the deconstruction of European culture. Spencer gained significant media attention in 2016 when he and several of his followers gave Donald Trump a Hitler salute.

Ghost has several times denounced Spencer and his white nationalist beliefs on Twitter and later on Gab. He has blamed Spencer for discrediting and utilizing the Trump brand to promote his own agenda. 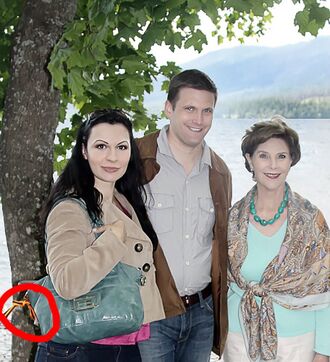 Picture of Nina Byzantina, Richard Spencer and Laura Bush that Ghost posted on his Twitter account in January 27th, 2017. Circled in red is what Ghost claims to be a "communist symbol" that Byzantina is wearing (note: the ribbon in question is ribbon of Saint George).

The entirety of Capitalist Episode 441 was dedicated to a massive conspiracy theory that Ghost had coined after sending members of the Capitalist Army and Ghost's Inner Circle to investigate Richard Spencer. After the investigation, Ghost came to the conclusion that the CIA, NSA and FBI had in fact been correct about the 2016 election hackings. Ghost went on to claim that Spencer was a Russian spy and info merchant who helped orchestrate the hackings and who the CIA is trying to utilize at the same time to discredit and potentially overthrow the Trump administration. As evidence, Ghost cited that Richard's former wife, Nina Byzantina, was a black-haired Russian nationalist bolshevik sympathizer when according to Ghost's words, Spencer "should have been banging some blue-eyed, blond-haired bimbo" if he really was a white nationalist. Ghost also pointed out that Spencer had defended homosexuality in the past for being part of European culture and called him out for being a fruitbowl.

Ghost also talked in length about Russian political philosopher Aleksandr Dugin who he cited was the real mastermind behind the Alt-Right and the relations that Spencer, Byzantina and Alex Jones had with him. Ghost cited that the entirety of meme magic and cult of kek were a Russian "failed psyop operation" to discredit Donald Trump. According to Ghost, the cult of kek is related to Russia since kek the Egyptian god of chaos and Aleksandr Dugin's youth organization Eurasian Youth Union happens to be using the symbol of chaos.

Ghost also cited that the entire planet was under the threat of a global communist revolution and Donald Trump was the sole resistance against this revolution and surprisingly even compared Trump to Hitler in how he rose to power from a bad situation in his country.

Retrieved from "https://truecapitalist.miraheze.org/w/index.php?title=Richard_B._Spencer&oldid=14890"
Categories:
Cookies help us deliver our services. By using our services, you agree to our use of cookies.