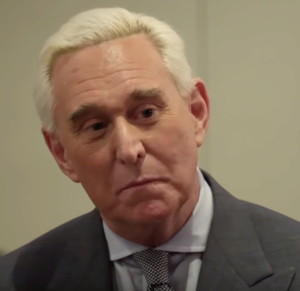 Roger Jason Stone Jr. (born August 27, 1952) is an American political consultant, currently with the Republican Party and the former campaign manager of Donald Trump. Ghost has frequently claimed that Stone is an associate of his. Stone is known to frequently dabble in conspiracy theories with his political ally, Alex Jones and has made similar claims as Ghost that he is being targeted by assassins sent by his opponents in the Government, going as far as to claim that he nearly died from Polonium poisoning on December 2016. Stone's views have had a profound effect on Ghost's views towards conspiracies. By reading the books that Stone wrote about the Bush and Clinton families, Ghost has learned a lot about them and has completely turned against George W. Bush, a president that he once endorsed and defended during his days of True Conservative Radio and earlier days of True Capitalist Radio. He now calls the Bush family "the Bush Crime Family" whenever they are mentioned on True Capitalist Radio and takes conspiracies as serious subject matters during the second hour, rather than as crazy tinfoil hat theories as he did before. He even went as far as to reconsider his views on Alex Jones for the duration of the 2016 presidential elections.

Despite claiming to be an associate of his, Stone never responded to the numerous tweets Ghost sent to him from his old Twitter account, likely indicating that Stone either doesn't know Ghost at all or isn't aware of his internet persona. When Stone was suspended from Twitter in October 2017, Ghost suggested that he should move to Gab (which he did) and sue Twitter into oblivion.

Trolling Roger Stone in splices have been somewhat successful, and there were a couple Twitter names that made fun of Roger Stone.

Retrieved from "https://truecapitalist.miraheze.org/w/index.php?title=Roger_Stone&oldid=19501"
Categories:
Cookies help us deliver our services. By using our services, you agree to our use of cookies.