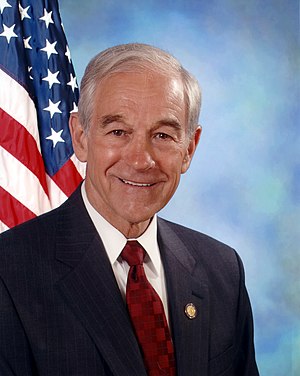 Ron Paul is an American Congressman currently living in Texas. He was part of the GOP candidacy for the 2012 United States Presidential Election. He is known for being a libertarian. He has amassed a rather sizable Internet following.

Ghost has strongly negative opinions of Rep. Paul. After his chosen candidate, Herman "Sugar" Cain, dropped out of the GOP race, Ghost began believing that he suffered a "modern media lynching" by the bureaucrats in office. Ghost has since turned around and condemned all in-office politicians (including Ron Paul) for being "career politicians" and "lying scumbags who will do anything to stay in office."

However, Ghost later stated that the non-interventionist policies of Ron Paul could result in avoiding a potential World War 3. Because of this, he took to considering Ron Paul and has said that he'll contact the Ron Paul Party and see if they are willing to do an interview with him on True Capitalist Radio.

After Ron Paul dropped out of the presidential race, Ghost has taken to endorsing Mitt Romney.

Because of Paul's massive Internet support, Ron Paul callers and spam in the chatroom was a constant event on the True Capitalist Radio broadcast. The spam was one of the most frequent reasons for Chatroom Martial Law being implemented.

Ghost claims that Ron Paul has a "whiny-bitch" voice and he often did impressions of it on the broadcast.

While covering a news story, Ghost once claimed (and has many times since) that Ron Paul is receiving a massive amount of campaign donations but isn't spending any of it. Ghost suggested that he is just holding onto it so that when he drops out of the running he will be able to keep it all, tax free.

After the original event, an unnamed girl called up and argued with Ghost. Unlike most callers, she actually used facts rather than just playing splices and music. They got into a heated two minute long debate. Unsurprisingly, Ghost muted her and claimed victory for himself.

Retrieved from "https://truecapitalist.miraheze.org/w/index.php?title=Ron_Paul&oldid=10200"
Categories:
Cookies help us deliver our services. By using our services, you agree to our use of cookies.