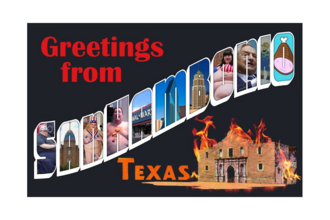 San Antonio is a large city in Texas that is near Austin and Houston. It is known for the Alamo, which many Texas soldiers died defending inside of. Ghost had moved to San Antonio after leasing his condo in Austin for six months. When he arrived on September 19th, 2016, He had been shocked to see how the city looked. The city has a population of overweight people which Ghost complained about. Ghost would also encounter a kid offering him a candy apple in his bare feet and a woman in a fountain cleaning herself which disgusted Ghost. Trolls would later piss him off with being stuck in San Antonio, including calling it "San Hambonio" which Ghost would later use because of the large number of hambones that inhabit the city. As far as trolls go, It's home to Pylons.

During Episode 560, Ghost has announced that he will be moving to another place in San Antonio, which he will be outright buying from someone. He said that place he had been living up until that point was just a rental joint, and the person who owns it is going to give it to his daughter, meaning Ghost has to pack up and move anyways. Ghost confirmed that he wasn't going to be moving back to Austin, and that his place is still being rented out back there. Ghost also added that the place was formerly the site of a murder-suicide.

Retrieved from "https://truecapitalist.miraheze.org/w/index.php?title=San_Antonio&oldid=13446"
Categories:
Cookies help us deliver our services. By using our services, you agree to our use of cookies.