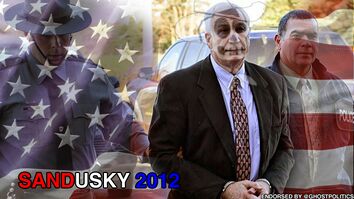 Jerry Sandusky is an ex-American Football coach from Penn State University. In November 2011 he was fired and imprisoned on charges of sexually molesting 40+ teenage boys over a span of 15 years. Because of his knowlege of the event but refusal to act, head coach Joe Paterno was also fired.

Ghost has covered the story around the time it happened and was disgusted by it, calling both Paterno and Sandusky "disgusting Woody Allen butt-loving pedophiles".

Ghost's coverage of the story sparked a series of Sandusky-themed Twitter and Chatroom names. The names have become a running gag in the 2011-12 days of the broadcast, along with PoopTickler and Burning Texas jokes.

Retrieved from "https://truecapitalist.miraheze.org/w/index.php?title=Jerry_Sandusky&oldid=14209"
Categories:
Cookies help us deliver our services. By using our services, you agree to our use of cookies.