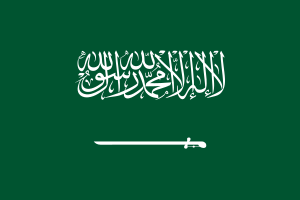 Saudi Arabia is a Unitary Islamic Absolute monarchy in the Middle East. Saudi Arabia is the largest oil producer in the world and one of the founding members of OPEC, an organization that is responsible for maintaining oil prices around the world. The country is commonly regarded as one of the main causes of Terrorism in region due to the large amounts of money it has used to promote their radical branch of Islam, Wahhabism, across the Islamic world. Saudi Arabia is regarded as a totalitarian state and has one of the most atrocious human rights records in the world, rivaling that of North Korea.

Despite Saudi Arabia's close ties to United States, Ghost regards it as one of America's greatest foes due to the above mentioned ties to Islamic terrorism. Ghost has claimed Saudi Arabia was behind the September 11, 2001 attacks, with the hijackers being under George W. Bush and the United States' government orders. He also demanded the senate to release the 28 pages missing that would have indicted Saudi Arabia. The pages were eventually released, albeit abridged. Ghost has said that Saudi Arabia is controlling the Oil of the world via OPEC and hopes that Donald Trump will not only get rid of the United States' dependency of Oil from Saudi Arabia, but will stage a destructive war between it and its arch-enemy, Iran, that will result in the collapse of both states.

Retrieved from "https://truecapitalist.miraheze.org/w/index.php?title=Saudi_Arabia&oldid=11517"
Category:
Cookies help us deliver our services. By using our services, you agree to our use of cookies.