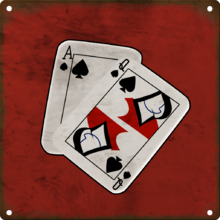 Scarlet Moon (later known as Blackjack) was a splicer that gained in popularity as a brony troll in the fall of 2016. He's made friends with plenty of non-brony trolls as he ran their remixes and splices on his many Google Hangouts lines, with the most recognizable area code being 352. Some of Scarlet's own splices are purposely racist, vulgar, attack ghost or his family. He utilized multiple Twitter accounts for Twitter Shoutout troll names, and archives all of his own splices on YouTube unmonetized free for others to use and listen to.

Scarlet started out in the spring of 2016 doing Twitter Shoutout names, but eventually began creating splices during mid summer. At first Scarlet would ask others to play the splices, but eventually started calling in. Scarlet frequents several TCR chat rooms, such as TheBronyNetwork, the Discord server, and the Steam chat.

To ensure that every requester gets a chance to have their splice played on Radio Graffiti, Scarlet runs a bot on Discord chat that helps keep track of the splices that are being queued on. The lines that get picked by Ghost are random and may be on area code "352" or "712", or may be anonymous, but the order of splices played will always be the same unless someone requested an instantaneous splice before Radio Graffiti has started. Scarlet can not accept any splices after Radio Graffiti has started. Your splice can be switched or the queue list could be changed if requested before that time. Even if he has 6 or more lines connected to BlogTalkRadio, there's no guarantee that Ghost will pick any of these up. However, many of the requested splices have led to cans.

This call system incurred ire at the height of the TCR Chatroom Cold War, with the Official TCR Discord claiming the callbot was unfair to members of their chat. In doing this, they had attempted to create a "Ban 352" group splice for the show, however the splice was swiftly stolen and counter-spliced. Both sides would later apologize for this incident following the end of the TCR Chatroom Cold War.

Scarlet was the first to notice and alert others of the ogcaptialistarmy Tinychat's growing hatred for Bronies after logging into their chat under ScarletMoon with the intent of socializing. After receiving multiple hateful private messages from other users, Scarlet quickly learned that many of them despise bronies even if the brony doesn't mention anything brony related; just being there is enough. Scarlet refers to the chat as "a pit of irrational biased hatred begging to be trolled".

Since then Scarlet helped Twilie Atkins with a coop splice calling out the chat's voice users for plotting against bronies. Other Bronies have since witnessed the chat users openly bashing on and accusing bronies of various things. Most of the time the chat users type "BAN ALL BRONIES" in response to pony related Twitter names, Splices, Remixes, or even if a brony name is mentioned on the show. Tinychat would later be disbanded by 2017 and moved to Discord.

Scarlet eventually got tired of trolling ghost for quite a while and agreed with many others that the glory days of TCR trolling were long gone. Once Ghost ended Radio Graffiti in 2018, Scarlet was very happy to retire. Scarlet had been getting more political with leanings towards centrist libertarian and classical liberal, and wanted more time to devote to their blog and sphere of influence. Scarlet soon after began using the name Blackjack to have a stronger sounding name. Since then Scarlet has been mostly absent in TCR, as he's focused on political activism for his new cause. he didn't made a return to trolling when The Ghost Show started. 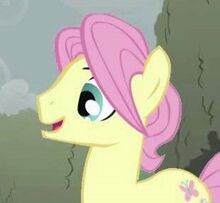 Flutterguy: A deep voiced perverted transgender version of Fluttershy, voiced by Scarlet Moon throughout early fall of 2016 during radio graffiti. Flutterguy would usually call in to hit on Ghost or invite him to go places. Scarlet states that this troll idea was inspired by Twilie's Fluttershy impression. The deep voice is based on the actual Flutterguy voice from the My Little Pony: Friendship is Magic episode titled Bridle Gossip, where Fluttershy is affected by Poison Joke, a mysterious plant found in the Everfree Forest, giving her a masculine voice.

Perverted Santa: A minor troll idea used during December 2016. Santa would call once or twice a day saying perverted things such as asking ghost to be his little nutcracker prince, to spank is naughty elf, and to meet him under the mistletoe. Jingle bells always play in the background and the splice always ends with a typical Santa laugh. A similar character was done for one show by J-Man in early November, but are otherwise unrelated.

Big Macintosh: A troll that Scarlet used during the height of Big Smoke's popularity. He has called up playing into the drive through meme, asking for Hay Fries a Hay burger and a Hay shake, but Scarlet has considered the possibility of more splices for this character.

Some people who have heard Scarlet's splices have assumed he was responsible for the Eeyore troll. However that's untrue, as Eeyore was actually another splicer named Striver who was involved in the inner circle. Scarlet has never been involved in the inner circle and has stated they never will be because it's easy to lose it at the drop of a hat.

Retrieved from "https://truecapitalist.miraheze.org/w/index.php?title=Scarlet_Moon&oldid=15917"
Categories:
Cookies help us deliver our services. By using our services, you agree to our use of cookies.