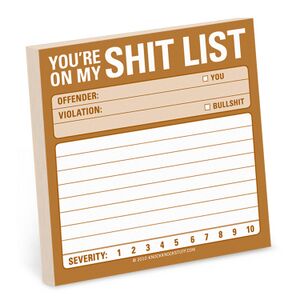 The first one is a supposed list that is being created by Ghost, the host of the True Capitalist Radio broadcast. Ghost has been known to Tweet videos he finds on YouTube and claims to add them to his shitlist. It is presumably the opposite, reputation-wise, of the Ring of Honor.

Even though the items on the shitlist and their uploaders are possible future victims of Punitive Damages, getting shitlisted is generally regarded as a great achievement by many remixers and splicers.

Ghost has been compiling this list for a couple of years now. There is no evidence of him actually having successfully removed any of the videos (some have been pulled by DMCA claims).

In 2019, Ghost has compiled a new list of the people who troll his new show The Ghost Show after several trolls pushed him into actually compiling one.

Items on the first shitlist

Remixes marked with * have been deleted

Ghost manages another Shitlist relating to the broadcast with less notoriety, but still prevalent to him personally. If a stupid caller gets on Ghost's nerves after failing a call or attempts to troll him during the News Commentary section of his broadcast, then there is a probable chance of Ghost taking down the caller's number (the BlogTalkRadio studio shows your entire number when you a call a show) and adding it to his gigantic ''list'' of such callers that he may later revisit, or threaten to dox them, should they try to troll him again. Many listeners like to tempt Ghost with such an addition, saying that it is illegal for him to release their numbers, or that they don't care if he logs them and will eventually forget.

Ghost often calls back these numbers during special broadcasts like Ghostmas, or in Paltalk chats. Many trolls have expressed great anger or concern once this happens, and generally will back off from Ghost afterwards. Others have needed a little coaxing to finally give in. In most cases, Ghost just says the full phone number immediately after perpetrators hang up or refuse to allow Ghost to call them back.

Note that *67, 'Area Code 111' and Google Hangouts callers cannot be traced, or recorded by Ghost, so if anonymity is a concern to any upcoming troll with interest in harassing Ghost, then 111, a Skype name or Anonymous is the safe way to go.

On July 18th, 2019, Ghost posted a new shitlist on his blog, after months of speculation and promising to post it. The list consists of individuals who he claims that aggriivate him nonstop on his show and has expressed how much he dislikes those on the list, claiming them to be in "hot water" with him, stating the list will grow if people keep doing what they're doing.

Note: Some of the names on the blog may be misspelled. Ghost has claimed the list is ever changing with new additional names.

These are the names that show up on the list:

Retrieved from "https://truecapitalist.miraheze.org/w/index.php?title=Shitlist&oldid=17021"
Categories:
Cookies help us deliver our services. By using our services, you agree to our use of cookies.