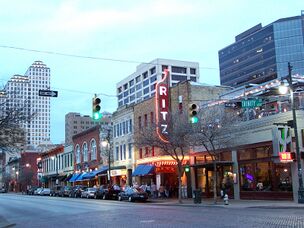 “I could be down on Sixth Street right now, instead of messing around with you jerk dicks!”

Sixth Street or 6th Street is a historical entertainment street in downtown Austin, Texas. It is often referenced by Ghost. He usually mentions it while raging, claiming "I don't have to be here messing around with you idiots! I could be down on Sixth Street right now! I could leave right now. It's dollar you call it night!"

On July 31, 2016, a shooting occurred on Sixth Street leaving one person dead and four wounded. Ghost said that the attack showed the decline of the district and Austin as a whole, and immediately presumed that the shooter was a "wild Jahooty". He later found out it was a "Dindu Nuffin" (Black man) who did the shooting. Ghost stated that Sixth Street was ruined and that he would leave Austin, which he did in mid September 2016. However, he has stated that he's only left for 6 months, and will come back once the lease of his condo is up.

Many callers have claimed to be on Sixth Street, saying "Ghost, I'm down on Sixth Street, come fight me." Ghost often agrees to meet them at a certain bar but he has never come through. Other callers claim they are there to visit Ghost (GhettoCapitalist and the Internet Buttstalker). Ghost has been known to paused radio graffiti on multiple broadcasts to tell people to stop calling clubs on Sixth Street to look for him.

During the 2011 Texas wildfires (The largest on record) several Twitter Shoutout names were made involving Sixth Street. The most well known being Sizzling Sixth Street.

In accordance to the Occupy Wall Street protests, another popular Twitter Shoutout name is Occupy Sixth Street. Many trolls called Sixth Street bars in an attempt to locate Ghost during one of his barhopping hours - and some have claimed they heard Ghost in the background during their calls. A clip from the Goofy Bone show features Ghost in the background during one of their prank calls in October 2011, though oddly enough at a bar on Fifth Street. Ghost has not been amused by this - stating that many of his accomplices that work at these establishments questioned him about the calls, and repeatedly asks listeners to not call Sixth Street bars and entertainment venues looking for him.

Tubguy posted a video of himself driving a semi truck in Austin, Texas. Part of the footage shows 6th Street active at night.

After the 2016 shooting, Sixth Street Twitter names came back into fashion, such as "Funeral at the Friends Bar", "Ghost Sixth Street Jihad", and "Shooting Pearls on Sixth Street", leading to Ghost ending the Twitter shoutouts in Episode 321.

Retrieved from "https://truecapitalist.miraheze.org/w/index.php?title=Sixth_Street&oldid=10232"
Category:
Cookies help us deliver our services. By using our services, you agree to our use of cookies.