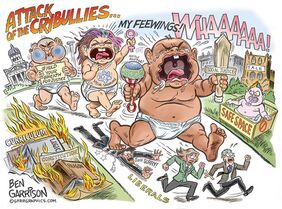 An accurate representation of Social Justice Warriors according to the libertarian cartoonist/Trump supporter Ben Garrison.

Social Justice Warrior is a pejorative label applied to bloggers, activists and commentators who are prone to engage in lengthy and hostile debates against others on a range of issues concerning social injustice, identity politics and political correctness. In contrast to the social justice blogosphere at large, the stereotype of a social justice warrior is distinguished by the use of overzealous and self-righteous rhetorics, as well as appealing to emotions over logic and reason. Black Lives Matter, most of the Feminist movement as well as good portion of the Tumblr blogosphere are seen as falling into this description by great portion of the people that use this term. They are also commonly associated with the presidential campaigns of either Hillary Clinton or Bernie Sanders as well as numerous anti-Trump riots that have taken place all over the United States and rest of the world.

Ghost strongly correlates this stereotype with left-wing politics in general and criticizes people who at least in his opinion fall into this category for being either fruitbowls or ugly fatties who will never have sex with the opposite gender. He often brings up the term when he is talking about either identity politics, feminism or millennials as a negative example of how sick, twisted, idiotic and self-righteous America has become under the presidency of Barack Obama.

Retrieved from "https://truecapitalist.miraheze.org/w/index.php?title=Social_Justice_Warrior&oldid=13354"
Categories:
Cookies help us deliver our services. By using our services, you agree to our use of cookies.