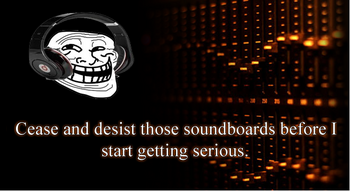 A soundboard is a program which contains small audio clips that can be played back on demand. They are one of the original ways to troll Ghost, the host of True Capitalist Radio. Some soundboards with Ghost's voice were used for making prank calls or putting together splices, while others would simply be played back live by trolls.

Similarly to the YouTube videos, at one point simply making soundboards was enough to get Ghost to rage. He went on many rants claiming to have "contacted the websites" and saying that he is "making a list" of names. He later expanded upon this to say he will sue the people on his list for "Punitive Damages."

Some failtrolls call the show using soundboards from other celebrities and films (such as Full Metal Jacket). Ghost usually kicks these callers off, cites the source, and mocks them for their lack of originality. On the other hand, certain popular prank call soundboards like the venerable Frank Garrett or the Springfield Pervert have Ghost react in rage or disgust.

In early 2012, trolls began calling other establishments using Ghost soundboards, recording them, and playing the results back to Ghost. He was very annoyed upon hearing a person describe his voice as sounding like Alex Jones. Notable calls include numerous radio hosts, Howard Stern (though this call was later determined to be a clever edit), the FBI, an elementary school (exclaiming that he was the 'king of 10-year-old boy ass') and the security division of Hasbro.

A common Trolling Tactic many callers use when trolling BlogTalkRadio is to use a soundboard of Ghost or to play audio splices of him saying derogatory things to prompt a reaction out of the hosts. Some have taken this even further, and call home phones with Ghost's voice - sometimes in the middle of the night, prompting furious responses and threats to 'find out' whoever it is that is on the line. Ghost, amusingly, when hearing these calls, sometimes takes a moment to mock the fruityness of a husband or young man who curses out the soundboard.

Ghost does not appreciate these calls, and has threatened to sentence Punitive Damages on anyone who continues to call others in his name or voice.

Recent use of Soundboards

Ghost can no longer be effectively trolled using soundboards. Ghost has become so accustomed to hearing clips of his own voice spliced that hearing his own voice unspliced no longer causes him any irritation. Since the Return, upon hearing clips of himself raging, ranting, or singing particular songs, Ghost will ask 'how far [they] had to go back in the archive to find that'. Nevertheless, new soundboards are still being produced by trolls out of clips Ghost says in a new broadcast. Some have called businesses related to a topic on the show and played these clips to the proprietors.

The most immediate example of this was the incident where Ghost called a Target in his feminine impression asking if he could use their restroom, in reference to the bathroom law in North Carolina. The next show, a troll called in with a recording of a prank call made with the very quotes Ghost used in his own calls, prompting a degree of discomfort from him in knowing how quickly his audience could manipulate his voice.

Retrieved from "https://truecapitalist.miraheze.org/w/index.php?title=Soundboards&oldid=19268"
Categories:
Cookies help us deliver our services. By using our services, you agree to our use of cookies.