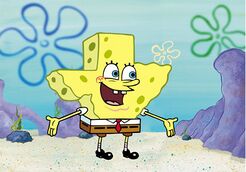 Spongebobbies is a term to refer to an adult or older teenager who watches the kid's TV show Spongebob Squarepants. It is similar to Bronies. It has led to a series of Twitter Names during Twitter Shoutouts on True Capitalist Radio. They have been used rarely, however, and seemingly weren't present in the post-return era.

Like the Surgeradio.org guy, a caller called in, advertising "SBCForums.com", a forum for fans of Spongebob Squarepants (now thesbcommunity.com). Ghost misunderstood, called them spongebobbies, and this opened the gates to a riptide of new trolling methods. The event has inspired Carebearies and Tankies, causing Ghost to question whether Asho was going around telling his eight year old friends to listen to True Capitalist Radio.


SpongeBob has also been used to troll independently of the "Spongebobbies", usually with an audio clip from the show of the titular character insulting Texas (seen in the page image); Ghost often misses the context of this, and simply states that they are "besmirchin' Texas", before going on a rant about how great his home state is.

During The Ghost Show Episode 36, a few listeners informed Ghost that a Pantera song was used in an episode of SpongeBob. Ghost believed that this was just a troll, but towards the end of the episode, he discovered that this was for real, causing him to be pissed off.

Retrieved from "https://truecapitalist.miraheze.org/w/index.php?title=SpongeBobbies&oldid=15423"
Categories:
Cookies help us deliver our services. By using our services, you agree to our use of cookies.