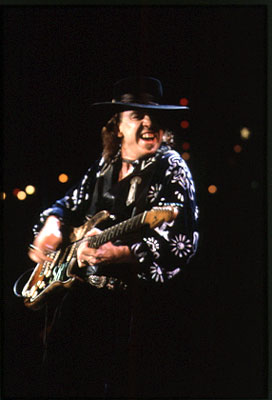 Stevie Ray Vaughan (October 3, 1954 - August 27, 1990) was an American musician, singer, songwriter, and record producer. In spite of a short-lived mainstream career spanning seven years, he was one of the most influential guitarists in the revival of blues in the 1980s. He died in a helicopter crash at the age of 35 on August 27, 1990.

Ghost himself is a big Stevie Ray Vaughan fan, claiming him to be "the greatest guitarist who ever lived". This, of course, led to various trolls on the subject. During Twitter Questions on Episode 324, one troll asked "Do you like regular Stevie Ray Vaughan or extra-crispy Stevie Ray Vaughan?", leading to cans.wav. One caller during Radio Graffiti said that he was the worst musician he's heard on Episode 175, leading to Ghost getting really pissed and ranting that he (Vaughan) put Austin, Texas on the map.

Many trolls, such as Boat073, have committed what Ghost refers to as "musical blasphemy" by remixing Stevie Ray's Pride and Joy with lyrics from songs and musicians that Ghost can't stand. Some of these include:

Aside from the Pride and Joy remixes, Episode 262 saw Ghost being remixed with Stevie Ray's Texas Flood, which caused Ghost to get pissed off due to people making fun of the rainstorms in Texas, and to also end the broadcast in rage.

Retrieved from "https://truecapitalist.miraheze.org/w/index.php?title=Stevie_Ray_Vaughan&oldid=14219"
Categories:
Cookies help us deliver our services. By using our services, you agree to our use of cookies.