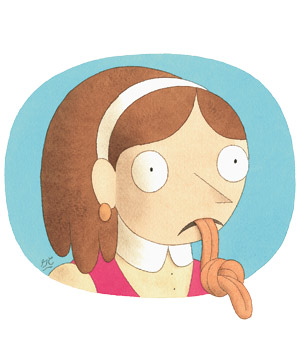 “Why are you stumbling and mumbling, you little stuttering prick?”

—Ghost, in a verbal tussle with area code 858

A Stumbling Mumbling Jerk Dick is a type of jerk-dick caller on True Capitalist Radio, hosted by Ghost. They are failtrolls who fail to even correctly pronounce their sentence fragment that they ripped-off from the Internet, or are too nervous to speak, and end up being incomprehensible to the listeners. They also have a tendency to say "um" or "uh" every sentence, effectively foiling their own trolling attempts. This term is closely related with No Personality Having Jerk Dicks.

Stumbling Mumbling Jerk Dicks are often stuttery and try again and again to pronounce simple words "ca-c-can yo-your Gr-gr-granny su-..."  and are usually hung up on by Ghost with him mocking their inability to speak simple English. According to Ghost, they are the result of Single Whore-Bag Mothers who never had a father to give them bass in their voice, and as a result they cannot even speak to a man with more resonance than themselves, let alone Ghost and his vernacular.

Stumbling Mumbling Jerk Dicks stutter and mutter on the air, making their speech difficult to understand. They are easily tongue-twisted and often replace words within sentences. All too often, the reason these jerk dicks stumble in the first place is because they speak too quickly in an attempt to get their entire sentence fragment into a five second call before Ghost hangs up on them. Callers with thick accents are prone to stumbling whenever they speak to Ghost, and Ghost often breaks them easily with a quick game of Guess the Minority.

The majority of SMJK's are new callers to the broadcast who don't understand how to properly put together a set-up line, or who are too feminine-sounding to bother listening to. If you suffer from this ailment, please check out this article and choose something else if you cannot even speak to Ghost on air without stuttering or cracking up.

Retrieved from "https://truecapitalist.miraheze.org/w/index.php?title=Stumbling_Mumbling_Jerk_Dick&oldid=7488"
Categories:
Cookies help us deliver our services. By using our services, you agree to our use of cookies.