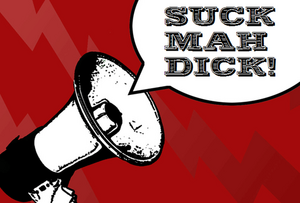 Suck Mah Dick Guy (sometimes known in the chat as SMD Guy) is a caller who is well-known for yelling "SUCK MAH DICK!" during his calls. He is one of the most well-known trolls on the show, and is often impersonated by newbies, but never bettered, with Ghost usually being able to tell the difference. His first 3 calls took place in Episode 153 (the first 2 calls were during a group of cluster calls that occurred early in the show, while he called in a 3rd time during that episode's Radio Graffiti segment).

SMD Guy often uses elaborate set-ups to his catchphrase, such as having a legitimate discussion that is genuine-sounding enough to fool Ghost, pretending to be the father of a female caller, singing to Ghost, or impersonating other well-known trolls on the show (such as Ghetto Capitalist and Tub Guy), which caused massive cans. He has often called from area codes 347 and 617, with loud background music at times, leading many to believe he is a DJ in the New York area.

Rina-chan called in with her impression of Twilight Sparkle and yellled "Suck my flank! Suck my flank!", which Ghost didn't seem to understand. Ghost thought the caller said "Suck my blank" and proceeded to go on a rant about straight-edge kids; many trolls found this somewhat "lulzy". On Episode 205 during Radio Graffiti, Rina-Chan called in with her impression of Twilight and yelled 'Suck mah dick! Suck mah dick!', which made Ghost angry but little did he know the next caller would be SMD guy himself, who caused massive cans, twice in a row.

Despite his notoriety on the show, and his well known catchphrase, Suck Mah Dick Guy has no known Twitter or BTR account, and as such, is completely anonymous to the fans.

On Episode 259, a splice of Suck Mah Dick Guy was placed with music, "I'm back Ghost. SUCK MAH DICK!". Ghost immediately remembered this and quickly ended the call, "Not this guy again!". Whether it truly was Suck Mah Dick Guy or someone attempting to revive him remains unknown.

Suck Mah Dick Guy made his comeback on Episode 364 where he pretended to be Bill Clinton before saying that he's going too make sure Ghost sucks his dick. And continued in subsequent episodes. He is on Team Engineer. Some people have questioned whether this is actually him, due to the volume of his shout not being on the same level as 2011-2012, but regardless it seems to be working as a troll tactic.

Another caller copied the tactic on Episode 424, but there were no cans. Instead, Ghost told him to shut up 3 times.

Suck Mah Dick Guy appeared to return on Episode 533, resulting in cans and Ghost exclaiming "I thought we got rid of that guy years ago!"

Retrieved from "https://truecapitalist.miraheze.org/w/index.php?title=Suck_Mah_Dick_Guy&oldid=20791"
Categories:
Cookies help us deliver our services. By using our services, you agree to our use of cookies.