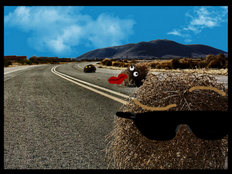 Suspicious Tumbleweed was a caller on True Capitalist Radio. She is also a member of the TCR Ring of Honor and was followed by Ghost on Twitter until his account was suspended.

Ghost seemed to be fond of her despite the fact that she is a female, teenage Canadian. He would often let her call in and rant about some analogy having to do with unspecified, though capitalism-related topic. As with most of his allies, Ghost was extremely defensive of Tumbleweed, and the recurring Twitter name "Tumble_Flat_Chest" usually sent him into a rage.

She has an interest in cosplaying, which led Ghost to claim that she looks like "a badass Advent Children ani-mee character" in Capitalist Episode 189. These comments are somewhat ironic considering the extremely negative opinion of anime, cosplay and all forms of fandom Ghost has developed in more recent years.

On episode #215, Suspicious Tumbleweed called in and confessed that she was a brony. This ultimately lead to Ghost discontinuing his friendship with her. 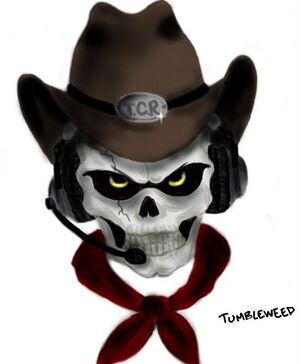 Tumbleweed made some original pieces of Ghost art, such as an submission for Ghost's new avatar (See right). She also made a skateboard deck featuring Ghost's old avatar and a True Capitalist Radio flag. Ghost has seen and been very appreciative of Tumbleweed's input to the TCR community and his show.

Suspicious Tumbleweed was involved in a group Skype call with Tri$ha/NoteParty on episode 187 of TCR. The call started with Tri$ha/NoteParty calling Ghost using Tumbleweed's Skype name. When Ghost called on Tumbleweed, Tri$ha answered and started going on her rant. Tumbleweed then interjected, screaming at Tri$ha for using her computer. There was a scuffle and Tumbleweed eventually exclaimed in a worried tone that she might have killed Tri$ha. Nobody else bought this apparent homicide, but Ghost believed then that Tumbleweed was Tri$ha. He seemed fairly upset by this possibility and in a future show made them speak at the same time to prove they were two different people.

Although it seems strange, it was inferred that Gasgara and Suspicious Tumbleweed had some sort of weird ongoing relationship. Though they have most likely not met in real life, Gasgara at least implied on Twitter that they have had some type of sexual relationship.

She has acknowledged Ghost's return multiple times on Twitter. She said on the comment section of the video Tumbleweed is a Brony that he should have never returned and criticized Ghost for milking his audience for what it's worth and said that she was too busy with her cosplay costumes to listen the show.

Retrieved from "https://truecapitalist.miraheze.org/w/index.php?title=Suspicious_Tumbleweed&oldid=18637"
Categories:
Cookies help us deliver our services. By using our services, you agree to our use of cookies.