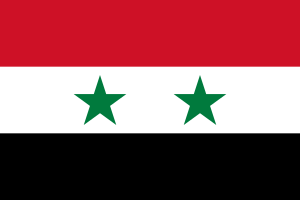 Syria is a country in the Middle East, located between Turkey and Iraq. Ghost covered the country during the Syrian Civil War, caused by Bashar Al-Assad killing his own people in 2011. Ghost covered the Civil War (which then, was called the Syrian Uprising) a lot during the 2011-12 run of True Capitalist Radio. One of his catchphrases during this era was "DEATH TO BASHAR AL-ASSAD!", which was because he was disgusted by Al-Assad's killing of his own people during 2011 and 2012.

When Ghost came back in 2016, the country was under siege by ISIS, in addition to Bashar Al-Assad's loyalists. Ghost frequently blamed Barack Obama's foreign policy and Hillary Clinton for making ISIS rise in the first place, which his viewers had no choice but to believe him. Throughout 2016, the country was torn apart by the civil war going on at the time.

A few months after Donald Trump was elected President of the United States in April 2017, Trump ordered a bombing of Syrian air force bases as retaliation of Al-Assad using gas to kill multiple Syrians. This move proved to be highly controversial within Ghost's Inner Circle, as one member (formerly known as Veteran Capitalist, now known as Veteran Nationalist) gave up his Inner Circle slot after Ghost defended the bombing.

ISIS ended up losing a significant portion of the territory they claimed were theirs during the course of 2017 and 2018. In April 2018, another U.S.-led bombing occurred, which many feared would be the beginning of World War III. Not one month later, Israel bombed Iranian and Syrian allied forces, leading to many Shoutout names referencing the bombings. By the end of 2018, ISIS only had a fraction of the territory they claimed.

Retrieved from "https://truecapitalist.miraheze.org/w/index.php?title=Syria&oldid=15327"
Categories:
Cookies help us deliver our services. By using our services, you agree to our use of cookies.