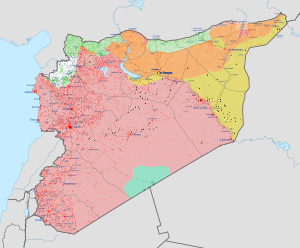 Syrian Civil War, also formerly known as The Syrian Uprising is an ongoing civil war between Syrian government, ISIS, Kurds and various independent smaller factions. The war began as a confrontation between peaceful protesters in Syria and the authoritarian government, but Syrian president Bashar Al-Assad's violent actions against the protesters eventually escalated into a full blown civil war. The Syrian Civil War is also one of the causes of the ongoing European Migrant Crisis. Ghost has been covering the news stories and deaths of the protesters, militants and soldiers since February 2011. It has been one True Capitalist Radio's longest lasting news stories.

Ghost initially strongly supported the revolution even though he was highly critical of the Libyan and Egyptian revolutions. Ghost was initially constantly bashing Syrian president Bashar Al-Assad, however as the War went on and the western support for the revolutionaries didn't occur, he came to believe that the Muslim population of the country was becoming radicalized and started to shift his support towards Al-Assad. Ghost's predictions turned out to be correct and two years after the end of the broadcast, reactionary Islamic extremist group known as ISIS rose out of seemingly nowhere and managed to take significant amounts of land from both Syria and Iraq. Ghost believes that the rise of ISIS was made possible by the support supposedly given to them by NATO and the United States of America.

Ghost has gone back to attacking Assad following the gassing of 70+ civilians, including children, in Syria. He called the attack a false flag, however stated that it didn't matter if it was real or not, as it only mattered what the public's perspective was. Ghost then applauded Trump for striking an airbase in Syria where the chemical weapons were supposedly fired from. This caused a rift between him and those who criticized Trump for these attacks, causing some Inner Circle members to leave, such as Veteran Capitalist (now known as Veteran Nationalist), causing Ghost to put them on blast on the show on several occasions. In 2012 and again in 2017, Ghost's views on Assad and the civil war have led to many sick twisted Twitter names referencing the events that have transpired.

Retrieved from "https://truecapitalist.miraheze.org/w/index.php?title=Syrian_Civil_War&oldid=9598"
Categories:
Cookies help us deliver our services. By using our services, you agree to our use of cookies.