Unlike YouTube, VaughnLIVE does not archive livestreams on their website. Therefore, to watch the latest episode, it's the same link. Since VaughnLIVE only provides 24 (non-VIP) or 72 (VIP) hours to download the previous stream, all broadcasts are uploaded to Ghost's BitChute account. If I don't feel too tired, I'll be more than glad to provide a YouTube livestream relay due to VaughnLIVE's bandwidth sucking the chrome off a 57' Chevy bumper.

In addition, due to the way VaughnLIVE works, if a broadcast is longer than 4 hours, it splits the broadcast into parts, in this case, all VaughnLIVE broadcasts are split into two parts. --Cans Abusing Meme Magician (talk) 16:07, 7 July 2019 (UTC)

I run Podpedia, a podcast encyclopedia and podcast wiki network on Miraheze. I am trying to build up the podcast wiki network at the moment by creating new wikis for podcasts on Podpedia. From what I can tell, True Capitalist Radio is not exactly a podcast, however it is similar enough to one that I believe that it could be on Podpedia as well. Being on Podpedia gives a wiki more exposure as the editors and readers of all of the other wikis on Podpedia may look at your wiki as well. Also, an extension that automatically creates articles for a podcast using an RSS feed when a new podcast episode is released is almost done, which will remove the need for editors to focus on creating new articles for episodes, and instead focus on creating other articles and improving existing articles. Please let me know if you are interested in adding the True Capitalist wiki to Podpedia. CoolieCoolster (talk) 17:01, 13 May 2018 (UTC)

IMO, the most tragic losses from the old wiki are the revision histories and comments sections on each article, many of which date all the way back to 2011-2012 when the show first became popular. Let's not forget that for many years, when Ghost had no internet presence, Wikia was the only place you could really find out and learn more about the show. Actually somewhat of a tragic loss that it's gone now, but I'm happy we were able to preserve the text of the articles on a host without censorship. Le ebin maymayman (talk) 13:54, 27 September 2018 (UTC) 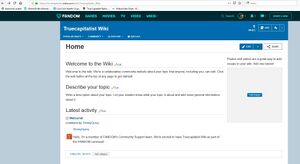 I just found out that someone has seemingly re-established the old wiki on November 5th. There are currently no articles on the wiki and I can't find out who's running this wiki. 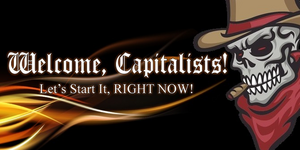 I don't know if anyone can do this or if we need to do it, but seeing as how Ghost's username on Gab is now occupied by a troll and he's still using Ghost.report as shown in Message from Ghost, is it possible to update the wiki's main image and replace the Gab link to @PoliticsGhost with a ghost.report logo and a link to ghost.report? Just curious if anyone can do that, or if we even need to do it. I mean, we kept the old Twitter name on the old wiki's image for 4-5 years, after all. ~InsaneEnergy (talk)

Yeah, I've been planning to do that for a few weeks now. I'll probably update it on Sunday or Monday. CapitalistContributor (talk) 20:52, 14 December 2018 (UTC)

Well, it could use some fine tuning, but still, that should be good enough for now. I also finally updated the cover image on the main page to feature Ghost's current avatar. Again, kind of a ghetto-ass job with the editing, but it will do for now (would've been nice if I had the background BlueChameleon used available). CapitalistContributor (talk) 19:36, 17 December 2018 (UTC)

After fiddling around for a while, I was finally able to get the polls on this wiki to work. You should be able to vote by clicking here.

Miraheze does this sometimes. It should return to normal soon. --CapitalistContributor (talk) 21:16, 31 December 2018 (UTC)

Retrieved from "https://truecapitalist.miraheze.org/w/index.php?title=Talk:Main_Page&oldid=16378"
Cookies help us deliver our services. By using our services, you agree to our use of cookies.