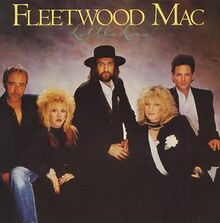 Little Lies, known in the TCR circles as Tell Me Lies, is a song written by the English/American rock band Fleetwood Mac. It's used in splices that highlight Ghost's hypocrisy or contradictions.

Usually the call plays out like this: The troll runs a clip of Ghost saying one thing, then another clip is played that proves he said or did the opposite. Then comes the familiar song, and then Ghost cuts the caller telling them to shut up which might also come with cans.wav, depending on the severity or importance of the subject. For example in Episode 491, when Ghost asked Alex Jones to hold-off drinking until the end of the show, a troll infuriated Ghost by playing a clip of him "going off the wagon" in the middle of a previous show. This type of splice only works if Ghost's statements or actions in the clip are authentic and have not been altered in a way that would "prove" Ghost's lie.

At a certain point in 2017, the Little Lies splices have gotten overused to the point that they hardly budged Ghost like they used to, which made it a form of fail-trolling. Exceptions to this are usually mid-show splices. The song itself appears to be retired since that time but it was succeeded by The Price Is Right losing horn, Sonic The Hedgehog Game Over music, and most recently, "Liar" by the British rock-band Queen.

Retrieved from "https://truecapitalist.miraheze.org/w/index.php?title=Tell_Me_Lies&oldid=15402"
Categories:
Cookies help us deliver our services. By using our services, you agree to our use of cookies.