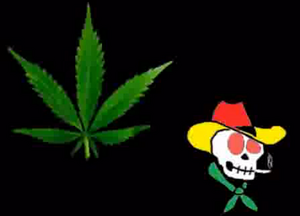 Tetrahydrocannabinol or THC is the primarily intoxication chemical in marijuana, and the term Ghost normally uses to refer to it. Despite being against marijuana, and also being in favor of eliminating all drug laws, Ghost, on episode 147 of True Conservative Radio, decided to smoke pot that he had (alledgedly) confiscated from an employee. This was done as an experiment to show all the ill-effects of drug use. Ghost used THC again during Episodes 69 and 219 of True Capitalist Radio where he celebrated stoner holiday 4/20.

In an effort to prove to his (at that time) young audience that marijuana was a harmful substance; Ghost decided to try THC and show how it effects a normal individual. He claims to having obtained the marijuana from a Mexican employee at one of his brick and mortar stores. During the episode, Ghost took several hits of THC and by the end of the episode he seemed to be pretty intoxicated.

This segment of the episode differs much from most any other episode of True Conservative Radio (with the exception of the "Ghetto Bird" episode). Rather than Ghost discussing politics while trolls called him up and attempted to anger him; the episode was rather Ghost rambling and talking to callers and users in the chat. Many of the callers who talked to him were attempting to have a real conservation and help Ghost, rather than making him rage (though there were still many trolls). Ghost even broke into laughter during troll calls rather than rage at the caller. At points, Ghost began to chew on "munchies" as a result of the marijuana, then later began to feel the effects of "paranoia". He did still proceed to rant about how society was degrading and the country was falling apart.

During the next episode, number 148, Ghost started the episode by discussing the pot segment. He felt the episode showed the negative effects of THC on an individual (which was the point).

Despite the above claims, Ghost must have enjoyed the experience because once again, on Episode 69 of True Capitalist Radio, Ghost recreationally smoked marijuana on air.

For the second consecutive 20th of April on Episode 219 of True Capitalist Radio, Ghost apparently bought a 'nug' of marijuana from a local bartender, whom he knew well and has heavily tipped in the past. Using the same 'apparatus' that he had confiscated from an employee, he proceeded to become heavily intoxicated over the course of the broadcast, displaying many of the classical effects associated with THC use.

Despite Episode 246 falling on April 20th, 2016, Ghost purposefully did not smoke marijuana on air. He claimed the 'holiday' was as conformist and regimented as Mother's Day, and since the 'plant' was legal in many states, no longer anything worth celebrating. After being asked by people on Twitter why he didn't get some to deal with the trolls, he said he wished he had some at that time.

On Episode 420, Ghost smoked some marijuana that he got from someone at his Christmas party who left his jacket with the weed inside at his house. He tried smoking it around the chimney so the rented house doesn't smell of marijuana. He coughed very heavily and soon began laughing while Templeton was wondering what Ghost was doing while Radio Graffiti was cut to 25 minutes. People on Radio Graffiti played slowed down music/splices, including audio of the African Booty Scratcher singing Fuck You Texas, along with one caller playing a police siren.

Ghost smoked marijuana on air again during Episode 493. Ghost tried some synthetic weed which made him high. The Engineer played some trippy music, but cut it abruptly, causing Ghost to be angry. In addition, many Inner Circle members, such as DistillingCapitalist and Asho, sniffed paint.

Ghost consumed the rest of the THC from Episode 493 after being pissed off by a few troll callers, including the Cleveland Caller. This is the first, and seemingly only time that THC was consumed on the Troll Show.

In celebration of his 500th episode, and Cinco de Mayonnaise, Ghost imbibed some Dom P and partook in the age-old Mexican tradition of smoking tetrahydrocannabinol. Notably, Ghost doesn't come up with an excuse for how he got the weed this time, suggesting he may have become a habitual stoner, though he is quick to blame the trolls for how low he's stooped.

To mark the occasion, Ghost has the Engineer put on some psychedelic music. Extremely inebriated, Ghost repeatedly says "Expand your consciousness" and claims he can "feel all the synapses" in his brain.

During Ghost's move from BlogTalkRadio to ghost.report, a few Gab streams were held to test the waters. In this one, following the end of the Three Stooges episode Ghost streamed, he decided to smoke some of the THC he had left over from partying with the TCR Chatroom. He then proceeded to put on Reefer Madness, an old anti-drug film, but quickly cut the stream short due to technical difficulties.

Ghost once again had left over THC from both the previous stream and 4/20, so to commemorate his return to broadcasting, he decided to smoke the rest of it in the third hour. His mellow was soon harshed by the Pet Mexican calling up and playing a splice over Ghost's crypto hotline.

Retrieved from "https://truecapitalist.miraheze.org/w/index.php?title=Tetrahydrocannabinol&oldid=15015"
Categories:
Cookies help us deliver our services. By using our services, you agree to our use of cookies.