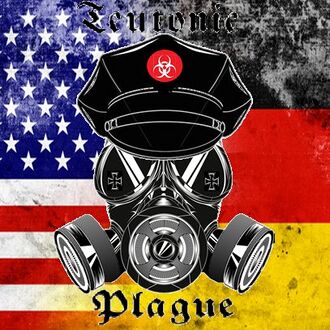 Teutonic Plague was among the most notorious serious callers of the post-Return era of True Capitalist Radio. He was known for calling in frequently, often once per episode if not more, and invariably agreeing with Ghost on whatever subjects he discussed that day while expressing adulation for Ghost himself. As a particularly sycophantic serious caller, Teutonic Plague was a cause of irritation and subject of mockery for many trolls. In an extended call on episode 246 (4/20/16), he claimed that certain trolls had harassed him into quitting Twitter, causing Ghost to stand up for him against the trolls (leading to Splices being made of him insulting Teutonic Plague). He has been compared to Karaszkun, including by Ghost himself (and similarly has claimed to have Asperger's syndrome), though many trolls see him as more annoying and less entertaining. The TinyChat room would flood discontent whenever his calls were taken. He generally holds extreme-right wing viewpoints mostly in line with Ghost, especially concerning Donald Trump (whom he began screaming about in ecstasy when he learned the candidate had secured the nomination). However, Ghost would dial his tone back when he finally said something out of line such as wishing to hang liberals or some kind of policy position that is so incongruous that Ghost must correct him.

After the 2016 MaskedPony Incident there were several attempts by different callers to try and prove to Ghost that Teutonic Plague was an anime fan in an effort to get him off the show. These callers tried to use Teutonic's Steam account as well as a tweet about an Undertale character that he made with his old Twitter profile as proof. Teutonic denied all these allegations, claiming that his Twitter account was hacked and used by a bot at the time the tweet happened, as well as allegations that he owned Undertale on Steam. These attempts failed at getting Teutonic off the show, and only caused Ghost to defend him even more aggressively. During Episode 298, Plague doxed himself, revealing his name and address. However, the dox he gave was proven fake.

People began to troll Ghost by playing clips of Teutonic Plague mimicking Ghost's voice patterns and catchphrases, such as "GOOD GOD!", "Awwwwwwww!", and "YOU SHOVE IT UP YOUR ASS!". These were mostly unsuccessful, as Ghost just told them to "stop player-hating on Plague". There were many splices making fun of Plague as well, such as him being anti-Texas or having sex with Ghost, these usually result in Ghost telling people to stop player-hating.

Make Teutonic A Meme was a twitter hashtag that was started by Disco Waffle in order to make fun of the Teutonic Plague. This was done by photoshopping his avatar onto images of people in situations that would have made him look like a hambone, brony, or anything else that Ghost hates. This trend went unnoticed by Ghost, but Teutonic mentioned it in an instance where he called in complaining that trolls on Tinychat were calling for him to be taken out of the broadcast. Amidst that, it still gained a minor following with Twilie Atkins and Yorkshire Capitalist contributing.

On October 3, 2016, Teutonic participated (along with many other serious callers) in an audio clip endorsing Team Engineer, leading to Ghost quitting the show 30 minutes early. He subsequently claimed on Twitter that his brown-nosing was an act. He stated he liked Ghost, and was still a member of the Capitalist Army, but didn't agree with everything Ghost said as he often pretended.

The next day, Teutonic tried to apologize to Ghost during Radio Graffiti, but Ghost refused to accept the apology, saying he could hear some dishonesty in his voice, and then cans.wav'd. It was briefly unclear whether Teutonic would stop calling, Ghost would refuse to take his calls, or if they would reconcile. He soon locked his account, saying he was keeping his tweets locked until he could call into the show again.

On Episode 370, Teutonic was one of the last callers, as part of a cluster call. Ghost didn't mind him being on, hinting at a possible forgiveness or that Betrayal Week was just an act. On the call, Teutonic announced that he was with Team Ghost and told everyone to vote for Trump in an SMD Guy fashion. Teutonic stayed as a (mostly) serious caller through most of October, though Ghost now had much less patience when dealing with him and no longer obsessively defended him from trolls.

Teutonic became involved with drama with other serious callers when, after Templeton bit Ghost on air for a second time, Teutonic made comments about what he would do to punish Templeton that were widely seen as overly cruel and abusive (Teutonic said thst he would slit a dog's throat if it tried to attack him multiple times). On Episode 379, Asho called in to tell Ghost that Teutonic said these things and tried to defend Templeton, only to get blocked by him. Ghost let Asho speak with Teutonic about it, who lost his shit and starting screaming at Asho for no reason. This led to the rise of a serious #BanTeutonic movement spearheaded by Jimmy Capitalist.

As a result, as of October 28th, 2016, Teutonic has been given a lifetime ban from the show. This was determined by an autograph-selling campaign devised by Ghost himself, in which if he sold more than 50 of Templeton's Pawprints, the ban would be enacted. This goal was far exceeded, notably due to a Twitter scandal that Teutonic allegedly partook in, involving Teutonic plotting to initiate his own independent broadcast, and endorsing Gary Johnson via his Twitter account.

Ghost initially regretted agreeing to ban Teutonic, but agreed to go through with it because the audience had spoken. When called upon one last time, Teutonic said that he had no hard feelings about the ban, and Ghost thanked him for his positive comments and dedication to the show. However, as his last statement on the air, Teutonic confessed to being a brony, causing Ghost to have a massive breakdown and lose any sympathy he had for Teutonic.

Afterwards, Kahuna Capitalist confirmed on Twitter that Teutonic Plague wasn't even trolling about being a brony, meaning he may have been trolling Ghost all along.

After his ban, Teutonic began to call in during Radio Graffiti as an anonymous caller from time to time, having made his return during a collaboration call in the 400th episode of TCR, and has become a troll caller, much like another serious caller that was also banned. In Episode 404, Ghost brought on Teutonic to counter the trolls after Trumping called the former "Pickleboy" and a hambone. However, Teutonic made a comment stating that the Engineer is the talent, causing Ghost to rage more over being betrayed.

In Episode 488, an anonymous caller played audio of someone sounding like Teutonic Plague reading the Anne Frank pregnant sex fanfiction, causing Ghost to cans.wav and declare he was "glad [Teutonic] was banned." According to a /pol/ user supposedly behind these calls, the audio is not by Teutonic.

On February 28, 2017, Teutonic launched his own show on BTR called Gamer's Quarantine: a show in which he talks about gaming related topics, along with using some format from Ghost's show, such includes Twitter Shoutouts and his own version of Radio Graffiti called Quips. The show didn't get attention until some trolls found out Teutonic has his own BTR show. They called in on the third episode with some splices and realized that Teutonic ran out of material and ended the broadcast 40 minutes before his show ended. On the first edition of the Saturday Night Troll Show, Teutonic would plug his show during the first hour to which Ghost stopped him and mocked his show.

Following The Break, Teutonic's appearances have been kept to a minimum, barring a serious call on Episode 510. Ghost would later accuse him of being the Cleveland Caller, openly mocking him during Episode 560. Ghost also commented on Teutonic upon hearing the dramatic reading of the pregnant Anne Frank fanfiction, stating that if he "knew back then that Teutonic was doing this crap... I would have never have let him on this show."

Teutonic's last call to date was presumably during Episode 549, where he sang a parody of the OU fight song telling the Engineer to take over the show. He hasn't made a return when The Ghost Show started in 2019.

Retrieved from "https://truecapitalist.miraheze.org/w/index.php?title=Teutonic_Plague&oldid=15918"
Categories:
Cookies help us deliver our services. By using our services, you agree to our use of cookies.