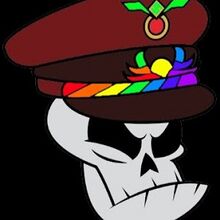 Sharp#Splicer (formerly #TheSplicer) is a former musical splicer as evidenced by his name, using # not as a Hashtag but as a musical Sharp. He is the former owner of the original TCR Discord Chat and former founder and owner of its successor. He is most notable for his contribution to the "Money, Success, Fame, Bronies" splice and the parody song "It's the Woodshed". Despite being of Dominican heritage, he won "Best Mexican" in the 2016 Ghosties. He is the first TCR Listener to win three Ghosties, although DeplorableCapitalist has won two Ghosties back to back, making him a close second for Most Ghosties won.

#SharpSplicer has been a listener since the June 17th 2011 episode was uploaded by DarkRazorZ. Aside from making an 8-bit Instrumental to "Money, Success, Fame, Bronies" he made a TCR-related parody of Giggle at the Ghosty with Rina-chan, as well as an 8-Bit Rendition of Fuck You Texas which was itself later used in a splice, and a Latin Merengue remix of "Melting Pot of Alcohol", much to Ghost's Ire, though he didn't Cans.wav at it.

#SharpSplicer had lost control of his "Melting Pot of Music" account, and as a result, started a new channel. The first Splice he made on this channel, and the first one he made since 2012- was a remix of Desiigner's "Panda" - the original song itself was wildly successful and thus it wouldn't be hard to make this splice, especially due to Ghost's constant raging at imaginary pandas. Some of the audio-clips were directly taken from Ghost's first reaction to "Money Success Fame Bronies" back in 2011. Upon hearing it, Ghost actually liked this remix, though.

#SharpSplicer was also responsible for many Intro Splices, most notably True Chris-Chan Radio and True Christmas Radio - both of which were played on Capitalist Episode 307, and the latter of which would cause Ghost to Cans.wav.

On Capitalist Episode 369, SharpSplicer along with members of his Chatroom- made a Splice about Boycotting True Capitalist Radio, as a result of insults Ghost had been saying on Paltalk, about G. This particular splice earned 14 Seconds of Cans.wav, making SharpSplicer and those involved with the Boycott Splice- the first in 5 years, to break the record for longest lasting, uninterrupted, single cans.wav rage.

On Capitalist Episode 401, SharpSplicer and his girlfriend, along with other bronies and non-bronies that were part of his chatroom- made, and played, a splice about how they wanted Ghost's wife to host the show.

On Episode 413, SharpSplicer made a splice of Ghost singing him "Happy Birthday"- using his actual first name.Unfortunately the splice was played twice.The next day, #SharpSplicer played a Holiday Version of "Fuck You Texas" and in spite of Ghost calling it a Circus Sideshow version, he still Cans.wav'ed. Later that same month, SharpSplicer, going by his real name, called TCR to accept his Ghosties from 2016 and one from 2011 that he never received until then.

SharpSplicer and The Chatroom (January - May 2017)

In early January 2017, a Discord User by the name of SuperSmash began to use vocal splices of an ongoing Voice-Chat taking place on a Discord Server in which SharpSplicer was an Admin (and which consisted of both brony and non-brony listeners of TCR). While the users who were spliced didn't initially take offense to it, the Staff of this Discord Chat did, and SuperSmash was subsequently kicked out.

SuperSmash was later allowed back in. In the days to follow, SuperSmash would go on to try to start conflict with another of Splicer's friends, and brag about whenever he had Cans.wav-worthy Reactions, although most of the people in SharpSplicer's server either got a Cans.wav via a Group Splice or separately. As a result of SuperSmash's constant arrogance, SharpSplicer put it to a vote within his server, whether or not to have SuperSmash banned. A StrawPoll vote was held and SuperSmash was banned. One of Smash's friends wanted a Recount, but SharpSplicer did not oblige.

On January 29th, Ghost was calling several members of SharpSplicer's chat, and who also paid to be in the inner circle, part of the "TCR Shortbus". The day after, SuperSmash played an old splice, made before he was banned from SharpSplicer's server. People in his server took offense to this, and as such, raided SuperSmash's server.

On February 1st, they argued in Voice-Chat, and the audio from this chat would later be used on February 2nd, in which SuperSmash would make SharpSplicer out to sound like a Serial Killer from a B-Movie. Said splice would ultimately fail to get Ghost to Cans.wav, thus proving a point of another one of SharpSplicer friends who had their own issues with Super Smash. That Friend of SharpSplicer would also call Super Smash out on his lack of originality as well.

On February 5th, SharpSplicer led one final Raid to SuperSmash, calling him out for another failtroll. It should be noted that, apart from SharpSplicer being personally offended about the previous splice, he also had enough of his failtrolling and as he would put it, "Diminishing the Quality of the show".

Splicer was inactive from March 2017, shortly after the Mr. Fortune Cookie/Mr. Optimism autograph wars and announced his full retirement as a Splicer in May of 2017.

Following Episode 459, MaskedPony uploaded an audio recording of himself to Dropbox, accusing SharpSplicer of doxing people and claiming that he would "take (the Splicer-- referred to by real name) out to the woodshed". Shortly thereafter, it was discovered that SharpSplicer's dox had been leaked onto pastebin, causing calamity throughout his discord server. Blame for this was, at the time, attributed to MaskedPony, with his uploaded recording suggesting that he was "blaming the victim". Further inspection of the dropbox page hosting the uploaded clip revealed a name. This led people to search the name and find the Facebook page of MaskedPony. This was further corroborated by posts from the account regarding True Capitalist Radio, including a post made on June 7th, 2016, the infamous day where ghost raged over Masked's revealed Diaper fetish. In an odd twist of fate, Masked had accidentally doxed himself.

As time went on, members of SharpSplicer's chat felt it less and less likely that MaskedPony was actually responsible for the doxing. The following day, SharpSplicer messaged Masked and invited him into the chat to discuss what had transpired. At the end, it was concluded that Maskedpony was not involved with the doxing, leaving the real culprit a mystery (The doxer was later revealed to be Disco Waffle.) The paste containing the dox has since been deleted.

It was reuploaded to Pastebin on March 2017 but SharpSplicer caught wind of it on May 2nd. He decided, as a result of this and due to his server having little to no activity, to leave the TCR Community for an indefinite amount of time. Unfortunately, and by strange coincidence, this was few days prior to Ghost announcing his own desire to no longer do his usual 3 hour shows.

Amidst the rumor that Ghost could return to TCR on August 2017, Splicer has also said he may come back to TCR but not as often as he used to. Sometime during mid-July, #SharpSplicer spoke to SuperSmash to delete Old Splices from his YouTube page. On August 4th, SharpSplicer decided to delete everything in his discord account, and made a new one to speak to only 5 users, showing little-to-no sign of ever wanting to return to the TCR fanbase.

SharpSplicer regained control of, and downloaded the videos in, his Melting Pot of Music Account, reuploading them to his current channel under the TCR Classic banner, as they were old splices he made in 2011-2012. The Old Account was fully deleted. On Episode 501, SharpSplicer (using real name, but Ghost called him Nalzy, showing how little he remembered him despite previously sending him two Ghosties) Called on Halloween, giving advice to Ghost, to cut off Nametagged Splices at the pass. He continually calls in playing Melodica or Guitar, often times, Ghost not knowing the song that #Splicer plays, and constantly calling his melodica a kazoo. However, he returned to splicing officially, on November 13th. The splice played was a remix of Ghost telling his fanbase to check out his gab, look at his gab. He originally decided to finally leave the TCR Community for good after winning his Ghostie for that remix.

While Sharp originally decided to take a leave from TCR, someone played an archived remix of Ghost telling people to go kill themselves- which Sharp had made the past summer, while Ghost was on hiatus. In light of recent events (most notably the end of the TCR Chatroom Cold War), he decided to make up with several high-tier members of La Casa de Trolls, promptly deciding to return as a Splicer/Remixer, although not on a consistent, every-episode basis. His first splice/remix upon said return was a fruited-up, EDM version of Ghost's "Original Song" from the 2017 Ghosties episode, and it was a collaboration with J-Man Capitalist. The Friday Thereafter, Ghost unveiled his plans to reveal a 1-900 Crypto Hotline, Prompting a Collaborative Splice made with 8equal to be played. The Monday thereafter, keeping in with the 1-900 Hotline jokes, he played a splice  based on a commercial for an old 900 service called "Dial-an-Insult".

SharpSplicer would leave the Official TCR Discord chat following drama between him, his girlfriend, DeplorableCapitalist, and InsaneEnergy. Ghost would later accuse SharpSplicer of being the Cleveland Caller, a claim which was vehemently denied via anonymous pastebin.

Retrieved from "https://truecapitalist.miraheze.org/w/index.php?title=SharpSplicer&oldid=13898"
Categories:
Cookies help us deliver our services. By using our services, you agree to our use of cookies.