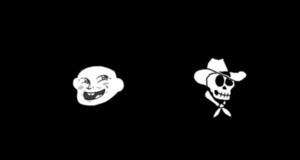 Ghost : "Aw you sick little son OF A BITCH! cans.wav ... I mean, WHERE ARE THE PARENTS for these sick twisted little brats!?"”

The Aborted Fetus was an eight-year-old troll from New York (calling from area code 315 in Syracuse) on True Capitalist Radio. He was one of the few underaged trolls who wasn't a failtroll, although it was widely speculated that he was actually an adult using a voice changer. He was active between June 2011 and August 2011.

His calls usually consisted of sexual advances towards Ghost which, while not out of the ordinary on TCR, were considerably more shocking than most other attempts on account of the perpetrator's age. And eight-year-olds, as Ghost put it, "shouldn't even know about that stuff." His calls usually led to Ghost bringing out the "woodchipper", citing that his parents "threw him in the woodchipper".

After a few massively successful trolls, with Ghost going on extended tirades about bad parenting, Ghost announced that he was going to call Child Protective Services on The Aborted Fetus, and he disappeared shortly afterwards, leaving no explanation to if he had ever been caught. He was given a Twitter shoutout to in Episode 172, but disappeared for good afterwards. He was one of the many trolls to not come back in 2016.

The Aborted Fetus' YouTube channel can be found at http://www.youtube.com/user/xSolutionHD

Retrieved from "https://truecapitalist.miraheze.org/w/index.php?title=The_Aborted_Fetus&oldid=14028"
Categories:
Cookies help us deliver our services. By using our services, you agree to our use of cookies.