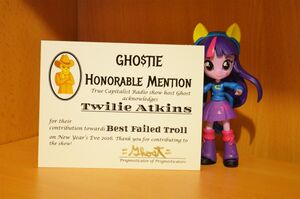 Unlike in the previous Ghosties awards, Ghost gave away physical awards in the form of unique autographs to those that were willing to send their name and address to him. Pictured; Twilie Atkins' Honorable Mention for Best Fail Troll.

Ghost returned in 2016, much to the happiness of the TCR fan base. Due to Donald Trump winning the election, Ghost decided to continue making the show, and hosted the second ever Ghosties.

The Ghosties for 2016 was held during New Year's Eve, on December 31st, 2016. People could nominate via Twitter using the hash tag #Ghosties16.

After the winners were announced, there was dissent via Twitter as many listeners refused to accept the results and began to accuse Ghost & his Inner Circle of vote rigging. These accusations were generally targeted across all categories however specifically levied against Best Mexican, Best Remix, Best Black Guy, Best Brony and Best Chatroom. Ghost admitted that /pol/ would have won Best Chatroom category if they didn't attempt to dox him all the time. Additionally he stated that TheBronyNetwork didn't win the same category because people from that chatroom were causing problems for him and the show all the time.

Retrieved from "https://truecapitalist.miraheze.org/w/index.php?title=The_Ghosties_(2016)&oldid=18631"
Categories:
Cookies help us deliver our services. By using our services, you agree to our use of cookies.