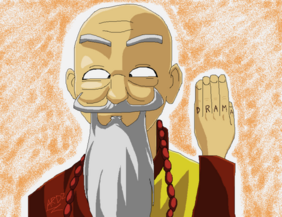 The Guru was one of Ghost's first ever 'special guests,' making a comeback in December 2011 with several extra appearances. In this segment, Ghost puts on an Indian accent and portrays a stereotypical Hindu for five minutes.

Like with many of his other 'guests', the segment eventually just breaks down into chanting, usually made of up the phrases 'Hare Krishna' and 'Cream of Sumyunghore' (possibly a corruption of Cream of Sum Yung Gai, a Chinese sauce).

He was one of the only characters who did not return when Ghost returned.

Retrieved from "https://truecapitalist.miraheze.org/w/index.php?title=The_Guru&oldid=10295"
Categories:
Cookies help us deliver our services. By using our services, you agree to our use of cookies.