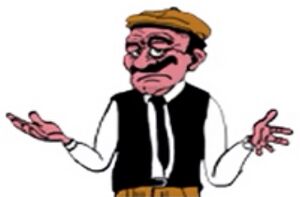 TonyTalk is an Italian BTR host from Boston who first joined in May 2018. His show mostly consists of him taking calls and giving advice. His show is aired on Sundays, and formerly on Tuesdays and Thursdays, beginning at either 8pm or 9pm CST. He is also notable for his Italian accent. Although he wasn't known about much at first, Tony got more attention when he started getting hit with trolls shortly after Ghost removed Radio Graffiti and Shoutouts from his own show. Lightning Note was the original uploader of segments of TonyTalk onto YouTube due to requests to do so, while few other channels dedicated to Tony upload full shows onto YouTube as well. Lightning Note stopped uploading TonyTalk content following tensions between TCR trolls and the TonyTalk community, however due to his departure from the TCR community, InsaneEnergy has since been the primary uploader of edited TonyTalk content on YouTube.

Many have theorized that Tony could perhaps be Ghost himself doing one of his many characters, much like Fat Tuna. This however has been proven false since most of the connections between Tony and Ghost don't match, such as Tony's residence, politics, and lack of Ghost's own personality and mannerisms. This is also supported by the fact that Tony rarely ever drinks alcohol, unlike Ghost.

Prior to Ghost stating on Episode 579 that he would no longer do Radio Graffiti or Shoutouts, and telling the trolls to find someone else to annoy, TonyTalk had already been receiving a small number of trolls every now and then. It was not until mid-June when Tony was discovered and got bombarded with trolls, much similar to the Psychic Kay raids that occurred in 2012 during Ghost's 4-year hiatus.

Such trolling tactics on the show include:

Jesco - A caller that has shown to be Tony's worst enemy, claiming to sell merchandise of him while using people to troll Tony. He would typically call in as a serious caller before revealing who he is, followed by the two exchanging insults to one another. It is claimed that Jesco is a homosexual prostitute.

Andy & Anus - A caller who calls in assuming to Tony to being a serious caller before revealing in the end to be Andy with his friend "Anus", followed by a fart noise. The duo have once shown up on The Ghost Show.

Don Cornelius - A serious caller who shares words of encouragement to Tony, as well as assist in his attempts to get back at Jesco. He often calls in with information on the whereabouts of Jesco, usually to be inaccurate.

Madalin Mitten - A fat woman (according to Tony) who often calls in demanding an apology from Tony for calling her fat. She often ends her calls with offers to have sex with him, much to Tony's disgust.

Barry Schwartz - A well known caller from Missouri who owns a flower shop and was the biggest troll on The Clay Douglas Show ( The Free American ) He claims to have received numerous TonyTalk merchandise and sells it out of his flower shop .

During July 2018, callers on Tony's show informed him of Ghost sending trolls after him to de-rail his show. This caused Tony to eventually call out Ghost from time to time for getting the amount of trolls he gets.

On Episode 600, someone called in during a special edition of Radio Graffiti telling Ghost that the trolls went over to TonyTalk and that Tony blames Ghost for the trolls. Ghost didn't seem to care, saying that he's not "entertainment for tards" anymore, and told the trolls to just keep bothering Tony.

Despite this, several listeners have tried to get the two hosts to confront each other, uncertain as to whether this would happen or not. On one broadcast, Tony stated that he will call up Ghost, but has had yet to do so. Due to the fact that Ghost has ended his show and left social media all together with the removal of his Gab account, this seems very unlikely.

Tensions between the TCR & TonyTalk communities

Between June-December 2018, TCR trolls started trolling Tony while many TonyTalk trolls became increasing hostile towards the TCR Community as a whole with tensions continuously worsening as they shifted blame towards them for various reasons, many of which without substantial evidence to backup those claims. It's speculated that they purposely planted accusations and blame for Tony ending his broadcasts to weed out anyone who isn't a part of their inner circle, much like how Ghost's Inner Circle thunderdomed some of their ex-members.

Many TCR trolls left the TonyTalk community as a result and resulted in a Cold War-type conflict.

Many TonyTalk trolls also called Ghost and attempted to get Tony Gaga to call in but Ghost shrugged them off & they were labelled failtrolls and fruitbowls.

Retrieved from "https://truecapitalist.miraheze.org/w/index.php?title=TonyTalk&oldid=16888"
Category:
Cookies help us deliver our services. By using our services, you agree to our use of cookies.