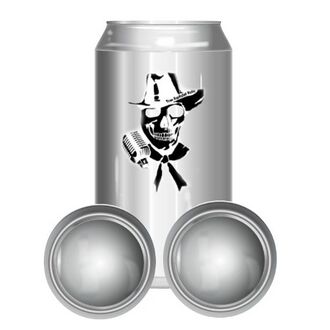 TransCan is a Twitter profile that surfaced in June 2016, displaying picture of a can with Ghost's logo on it and two fallen over cans in front of it resembling a pair of testicles as its profile picture. After first seeing the Twitter profile during Shoutouts, Ghost was highly disgusted by the name and even more so by the profile picture. TransCan was soon followed by TransBathtub, and other derivatives coupled with a pair of balls on their profile pictures, eventually evolving into the biggest lineup of Twitter names in True Capitalist Radio hisory since the PoopTickler dynasty. Trans names remained the staple of sick, sadistic Twitter, Gab And Chatroom Names for the next two years, only dying off after Ghost stopped taking shoutouts from Episode 579 onwards.

During the September 2016 TCR Civil War, TransCan announced his support for Engineer on Twitter.

On December 29, 2017, a crypto currency known as Transcoin "TRN" was discovered by Ghost, causing him to cans.wav in disgust.

Retrieved from "https://truecapitalist.miraheze.org/w/index.php?title=TransCan&oldid=14052"
Categories:
Cookies help us deliver our services. By using our services, you agree to our use of cookies.