Not to be confused with World War III.

“Troll War Three was a bloody affair and many were left doxed and DDoSed, but I assure you, capitalism will prevail. Ghost has vowed to continue on with his True Capitalist Radio broadcast and I see this move as a decisive indicator of the True Capitalist Army's victory over troll terrorism.”

—Senator Pooptickler, in his address to the Capitalist Army

Troll War III was a conflict that began as a result of Ghost announcing that he would stop broadcasting on True Capitalist Radio. Ghost made this announcement following an attempted doxing by Celtic Brony, who had been working for months trying to reveal Ghost's identity for the 'NCF' - an anti-Brony group.

It is referred to as Troll War 'III' not as a reference to the possibility of World War III, but as a continuation of two prior events on BlogTalkRadio, hence dubbed Troll Wars 'I' and 'II'. These conflicts mostly centered on Debi Daly, but Ghost may have played a passive role in them. Troll War I occured throughout 2009 and featured Debi pitted against Bill Waggoner and his 'crew' of trolls, and Troll War II was a mass conflict with Debi against numerous hosts in late 2010, notable ones including Goofy Bone and Vince in the Bay. The conflict described below is hence dubbed as 'III' because a few trolls dating from these two earlier conflicts ended up in the mix of things, and hence called it a revival of earlier conflicts finally brought to light.

Following the 204th episode of True Capitalist Radio on January 27, 2012, Ghost announced in his BTR chatroom that he would host a Paltalk chat that night if enough people tweeted at him. Later that night (after receiving a good deal of tweets) Ghost hosted a chat but decided he would rather try out Tinychat than use Paltalk again. As usual, Ghost's chatroom filled up with many trolls. At some point during the chat Celtic Brony, apparently using a Tinychat exploit, was able to find an IP address which he believed belonged to Ghost.

CelticBrony messaged Ghost with his supposed IP. Ghost left shortly afterwards. Whether this was due to the message, an attack, or other events is unclear, but Ghost likely became upset after seeing it for reasons pertaining to his long uneven relation with CelticBrony, who trolled him on a consistent basis, and had been trying to get his dox for a very long time.

Celtic later proceeded to claim that Ghost was Peter Zacher from San Antonio. It is unclear how he moved from the provided IP address to Zacher - prompting scrutiny. He posted no evidence. However, it is likely that this alter ego is incorrect due to the fact that Zacher is only in his mid-40's. Based on the info Ghost has provided about himself, he is likely in his mid 50-60's. Several people have also called Peter and found it unlikely that it is Ghost. Many calls were directed to Zacher, who denied this, and knew nothing of what was going on.

The original NCF dox of Celtic

Ghost was upset by the glee that Celtic took from apparently doxing him. Early on the following Sunday (January 29th, 2012), Ghost announced on Twitter that February would be his final month on BTR. Trolls were confused and upset by this. At the time, it was unclear if Ghost was done broadcasting all together or if he was just upset over BTR and was moving to a new platform, but many pointed fingers at Celtic, thus creating a deep division in the community. Ghost eventually posted a blog postabout what happened (to this date it is his last usage of that blog). He denied being Peter Zacher and (without naming Celtic) said he would not broadcast until the trolls dealt with his attackers. Luckily for Ghost, Celtic had already been doxed by the NCF. In a charge led by Senator Pooptickler, which included the BWC, some friendly NCF members (possibly those mentioned above from the earlier 'Troll Wars', and a group of trolls using the moniker the Captialist Union, Celtic Brony was pizza bombed and harassed. Prior to leaving he released a group of dox including Vince in the Bay, Goofy Bone, and Xarahox. He also attempted to dox 213 and DDoS his IP. Celtic then deleted his Youtube and Twitter accounts. He still tried to claim victory and even claimed to be a member of Lulzsec. Trolls swiftly gave him the boot and declared victory for Ghost at the turn of February. 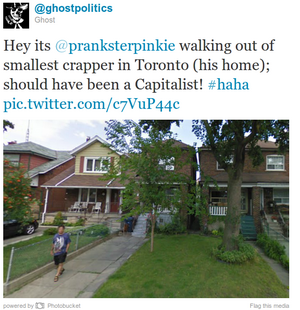 PranksterPinkiePie was one of Celtic's few supporters throughout this ordeal. He attempted to assist Celtic by posting some of Peter Zacher's apparent brick & mortar businesses. The trolls responded by posting a dox that supposedly belonged to PranksterPinkiePie, although he denied it.

The Troll War mostly ended on January 30th, 2012, although IbanEzzo would continue his own goals up until being doxed a month later. Ghost 'declared' the end of the dox wars early on the 1st of Febuary. In the end, many people were doxed and some left the community, disgusted at Ghost's behavior and the many friendships that fell apart due to his tantrums at Celtic.

Many of Celtic's supporters were bronies, and the war increased tensions between bronies and TCR fans - leading to a drop in Ghost's popularity following his demise in May, that would not pick back up for a bit of time. Celtic is seen as a traitor to the community now, and many believe it was him alone who orchestrated the entire war, with the intention of getting Ghost off the show. He succeeded, as it seems, and Ghost finally submitted to the trolls in his final Paltalk chat on June 1st, and later lost his original Twitter account a few months later to a group of GNAA trolls who had been provoking him for a while (with Celtic in mind). This left Ghost completely off the internet until he recovered his Youtube and BlogTalkRadio account in November 2015.

The NCF's role in the war remains unclear, but it appears that either Celtic was lying when he stated he was a member of their group, or that they turned against Ghost afterwards during the May attack. It is now accepted generally that Celtic and the NCF are one and the same.

Retrieved from "https://truecapitalist.miraheze.org/w/index.php?title=Troll_War_III&oldid=11641"
Category:
Cookies help us deliver our services. By using our services, you agree to our use of cookies.