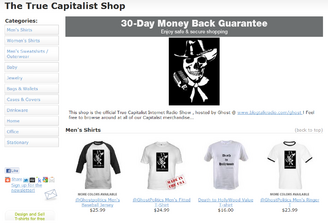 Ghost used his broadcast and Twitter account to advertise his merchandise, offering subscriptions to anyone who purchased his products and made a YouTube video of them with their product before January 8th. Ghost originally set the final date for purchases at January 8th, 2012, though, the submission videos could be posted later if needed.

Trolls took this as another opportunity to troll Ghost. Videos featuring fake merchandise were tweeted at Ghost and were subsequently rejected.

The Merchandise became availiable after the change in Ghost's avatar.

There was much controversy over the material itself, since it was reputed to be of 'poor quality', very very expensive (to which Coodoo even mentioned in one of his song lyrics), and Ghost later unfollowed all of the buyers.

In early July 2013, a person impersonating Ghost promised to re-follow anyone who uploaded a video of their merchandise and tweet back at him. He did not follow anyone, only prompting more scrutiny at the impostor's lack of keeping promises.

As of July 2018, the Cafepress store is still active with all the old merch available, however it's unknown if Ghost still has control over it, or how long it will remain up for.

After The Return, Ghost announced in June 2016 that he was writing a book (possibly to be released as an audiobook, as he questioned both the free time and attention spans of his audience) on "how to be a Capitalist", as well as planning to offer autographed beer cans he had drank and thrown around on the show. He began questioning the latter idea within minutes, as several Radio Graffiti callers mentioned being interested in the cans for sexual purposes, while others proposed using them to obtain DNA samples of Ghost. Ghost suggested that he might clean the cans with rubbing alcohol to thwart the callers' schemes, or simply abandon the idea altogether.

While Ghost has yet to follow up on either of these plans, he has opened a merchandise website, ghost.market, where he has marketed several items. First, he sold membership in the Inner Circle for $45 (later $50), though this did not come with any physical merchandise. Next, he began offering postcards with his signature, a drawing, and a serial number (under the misguided belief that they would become a collectible) for $20. He initially planned to mail them with custom stamps of his avatar, but Zazzle, where he had intented to get these stamps, informed him that they could not make such stamps because of US Postal Service regulations on "political content" on official stamps. As a result, Ghost now believes that Zazzle is cahoots with the government to suppress his free speech.

This went well until by popular demand he also started selling autographed postcards of the "Engin Ear" for a discounted $9. During Capitalist Episode 358, this led to the TCR Civil War as Ghost was enraged that anyone wanted an Engineer postcard, though he calmed down when he realized that the Engineer's was not going to outsell his own.

Ghost initially did not plan to sell mass-produced generic merchandise like t-shirts, though again by popular demand he has softened somewhat and considered selling such products after all. He later began selling "Ghostler Youth" apparel through Teespring (strangely not on ghost.market), as well as a "Meme Wars" one, a "Remove Kebab" one, and a "Free helicopter rides" one. Ghost has since started selling both merch of his new avatar and Radio Graffiti apparel through Teespring, even in spite of Radio Graffiti no longer being a part of the show.

Following the financial (if not emotional) success of the Ghost-Engineer autograph battle, Ghost has staged competitions between autograph postcards of a number of characters from the show for various purposes. Virtually all of this merchandise has sold well and can be assumed to be making Ghost fairly wealthy given the inexpensive nature of the cards themselves. Since the Return the following cards have been sold:

With the exception of the original Ghost card, all of the postcard art, like Ghost's avatar from September 2016 til October 2017, has been done by KaraszKun and features skeletal motifs inspired by said avatar. These provide the first official artwork of any character other than Ghost himself.

Trolls often suggest that Ghost sell various other autographs, leading to an entire category of Twitter names. Some of the more popular campaigns have been successful in getting Ghost to sell particular items, such as those for "pony merch" and "Mah Keedz merch".

The "mah keedz merch" was supposedly taken down by Elfoxoloco following him reporting it to Gumroad for "racist content". Later, Ghost's entire gumroad was taken down for making "El Poz-Hole Fox-Hole" merch, supposedly due to reporting done by Elfoxoloco. This led to the end of ghost.market, as the page simply redirected to Ghost's BlogTalkRadio page.

However, following interest in Inner Circle slots and merch, Ghost put up a new online store, with new IC slots going for $300 and two shirts currently for sale. It's unclear if any more autographs will be sold, especially considering the now strained relationship between Ghost and Karaszkun. Ghost has claimed he actually paid Karaszkun upwards of $1000 on commission for the art used on the show and the autographs.

Recently, fans and trolls have demanded Ghost sell more autographs to "save Radio Graffiti", as the segment has been completely cut out of the show. Due to Ghost's now repaired relationship with Karaszkun, this is a possibility. On July 9th, Ghost put out his first autograph in over a year, being a 2018 version of the original "Capitalism or Death" autograph with his new avatar. In addition, Ghost will also be giving anyone who purchases one an authentic bottlecap from a beer that Ghost drank on the show at some point. The method of buying merch has changed due to Ghost's gumroad being removed, instead being done by giving Ghost a $16 tip on a Gab video, then DMing him your address to ship it to. Ghost sent out the first batch, however noted that Templeton had chewed into some the envelopes he will be sending them in. Ghost says the autograph will be pulled from sale at the end of the following week, presumably July 22nd.

Additionally, Ghost also put out a new item on Teespring, the "Russian Hackers" apparel (very much meant to mock the claims that Russia meddled into the 2016 Presidential Elections), on July 17th.

Retrieved from "https://truecapitalist.miraheze.org/w/index.php?title=True_Capitalist_Radio_Merchandise&oldid=14320"
Category:
Cookies help us deliver our services. By using our services, you agree to our use of cookies.