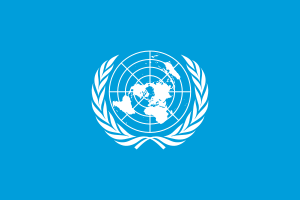 The United Nations, or UN, is an international organization whose stated aims are facilitating cooperation in international law, international security, economic development, social progress, human rights, and achievement of world peace. The UN was founded in 1945 after World War II to replace the League of Nations, to stop wars between countries, and to provide a platform for dialogue.

UN intervention in international conflicts is a major trigger point for Ghost. Their involvement (or lack thereof) in Syria in particular has provoked Ghost to call for the UN to be dissolved, making comparisons to the League of Nations and its failures.

The UN again became a heated topic during the Return when Ghost thought the internet would be handed to the UN to censor the internet (in his eyes). A troll terrorist in the same show created the Twitter name UN 1 Internet 0, which enraged Ghost.

Retrieved from "https://truecapitalist.miraheze.org/w/index.php?title=United_Nations&oldid=8753"
Categories:
Cookies help us deliver our services. By using our services, you agree to our use of cookies.