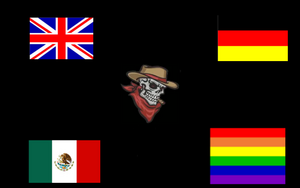 This is an article on Ghost's Voice Impersonations, for his special guests, see Special Guests.

During the course of the True Conservative Radio and True Captialist Radio broadcasts, Ghost, the host, has been known for his frequent voice impersonations of various groups of people or individuals.

These impersonations are usually exaggerated (for comedic effect) and stereotypical of whoever he is impersonating. Ghost usually uses these voices when covering news stories relating to the nations or cities he is discussing, or while speaking with callers who have a strong accent.

The difference between Ghost's voice impersonations and his special guests are small, but significant. When Ghost does his "Special Guests" segments, he treats the "guests" as if they were different people. He also claims that they are individuals and that he is not voice acting.

While Ghost is doing a Voice Impersonation, however, he does not treat the voice as a separate being. The voice impersonations are also much briefer, usually only lasting a few seconds or a few lines.

Ghost is probably most well known for his attempt at a generic-English accent, especially when talking about the FTSE in the Stock Markets, unless it has taken a nasty plummet in the Market, at which he'll talk normally, sometimes saying "I'm not gonna do the English Accent this time..." which usually warns the FTSE went down in the Market.

Retrieved from "https://truecapitalist.miraheze.org/w/index.php?title=Voice_Impersonations&oldid=19395"
Categories:
Cookies help us deliver our services. By using our services, you agree to our use of cookies.