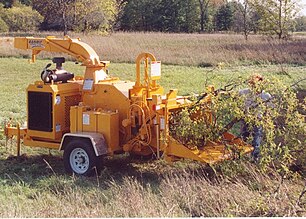 “You're throwing your kids into woodchippers and you don't care! You idiots don't care!”

The Woodchipper is an infrequently recurring segment on Ghost's True Capitalist Radio program. It usually follows news stories relating to long term crises, like the United States' debt or education, or young trolls such as Asho and The Aborted Fetus. Ghost believes anyone who, metaphorically, throws their kids into woodchippers, is contributing to Junkyard America. Ghost is often critical of older Americans who (according to Ghost) have run the United States into the ground through overuse of its social programs and the lack of parental support in education and child care. The Woodchipper segment is an allusion to this belief.

Ghost plays The Hands of Small Children by Marilyn Manson, and shouts "YOUR PARENTS DID THIS!"

The woodchipper itself is sometimes used to troll Ghost. There have been splices of Ghost throwing people he likes in the woodchipper, although these have been mainly present in the first couple months of Ghost's return.

Retrieved from "https://truecapitalist.miraheze.org/w/index.php?title=Woodchipper&oldid=12759"
Categories:
Cookies help us deliver our services. By using our services, you agree to our use of cookies.