“If I was your daddy... then by God, I'd take you out to the damn woodshed boy!”

“TAKE THAT POKEMON GO CRAP, YOU STUPID LOSER! YOU WANT TO BE A LOSER? YOU WANT TO CAPTURE MONSTERS? HERE, CAPTURE THIS ON YOUR ASS THEN!” Not to be confused with the conceptually similar Woodchipper.

Starting in summer of 2016, Ghost irregularly but frequently narrates dragging listeners out to the Woodshed and beating them with his belt. He believes that this will substitute for the lack of such corporal punishment in their youth, due to being raised by single mothers, and set them straight from being fruitbowls, moochers, troll terrorists, and jerk dicks. The "segment" usually consists of Ghost yelling "Yah!" repeatedly while whipping at the air with his belt, sometimes adding in other insults toward the listeners. Ghost has been known to continue this for as much as ten minutes at a time. 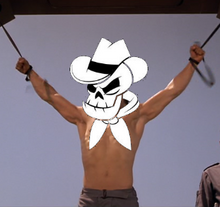 Ghost about to be whipped

In Episode 321, Ghost apparently broke his favorite belt while "taking the trolls out to the Woodshed". He subsequently blamed the trolls for breaking it, and immediately decided to get a refund by claiming it was defective. As he had done this just a week earlier in Episode 317 with his "special award", Ghost's inability to take responsibility for his own destruction led to calls such as a "True Irresponsibility Radio" intro parody by thisissparta789789.

Ghost has recently re-used this term for the punishment of people acting up in his official TCR Discord, with spammers and the like being sent to the "woodshed" temporarily.

Retrieved from "https://truecapitalist.miraheze.org/w/index.php?title=Woodshed&oldid=12731"
Categories:
Cookies help us deliver our services. By using our services, you agree to our use of cookies.